Wicked Intentions is on sale through Halloween! 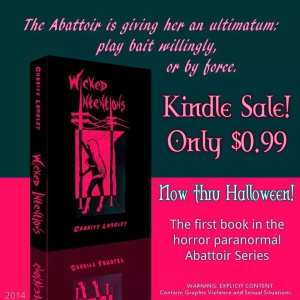 Life was bad enough when Lauren DarPayne hit puberty and sprouted a set of fangs, but now it’s hell.

After almost killing her boyfriend Derik and turning him into a vampire, she quit college and moved from small town Louisiana all the way to Atlanta, Georgia to be a stripper at Wicked Intentions. It’s good money, a great place to hide, and an easy meal ticket… well, at least until a psycho with some interesting non-human abilities starts eviscerating her coworkers. Now, due to her past ‘indiscretion’ with Derik, the governing body of all cryptid, the Abattoir, is giving her an ultimatum: play bait willingly, or by force.

A brief moment of complete silence followed. The darkness felt alive and closing in on me. Then a murmur of excitement began to roar through the building. Glasses breaking, a short shriek from backstage. I clung to the pole. Anyone taking me would have to take the damn pole too.

“Can you see anything?” Therone’s voice hissed in my ear.

“No, nothing,” I replied shakily. “Not even the streetlights from outside.”

I stood there for what felt like an eternity. I was squeezing the pole so tight I half expected it to crumble between my fingers. From somewhere downstairs a generator sputtered and flickered to life.

“Our apologies ladies and gentlemen,” the announcer called out as dim fluorescent light washed over the main floor. “There’s been some sort of power issue. We appreciate your business and are handing out vouchers to another show as you exit. We apologize for any inconvenience and wish you all a safe drive home.”

I stood alone on stage watching as the crowd began to move unhappily toward the door. As the last few stragglers left, a familiar scent flooded my nose. My heart pounded in my ears, and fear pushed my stomach up into my throat.

“Therone,” I rasped into my receiver while my eyes darted frantically around, “please tell me that I’m not the only one who smells that!”

“You’re not,” he said after a long pause.

“Where is it coming from?”

“I’m not sure, we have to wait until the last customer leaves. I have two agents checking the bathrooms and five others doing a general sweep. Hang tight.”

My eyes finally adjusted in the eerie light. I inhaled again and started searching for the source.

It was coming from the bar.

I went numb. Greg was working behind the bar, surely the killer wouldn’t have…

“Therone!” I yelled, my voice catching in my throat as I walked toward the scent. “Therone!” I shrieked a second time for lack of anything else to say.

“What is it?” Therone said running to my side.

The message was simple, short, and written on the wall in blood: